The Virtual Ephrata Academy: African Americans in the Revolutionary War 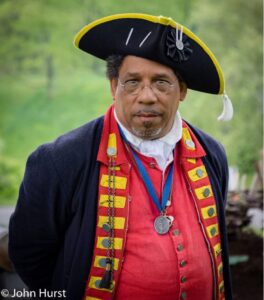 Almost any American would recognize the famous 1851 painting of Washington Crossing the Delaware. The great general standing in the center of the boat as other patriots’ row to the other shore. Have you looked closely at the other men? Did you notice that the one by Washington’s knee is an African American? Nearly 5,000 to 8,000 of the soldiers who joined the fight for American independence were African American. Their stories are featured in the next Virtual Ephrata Academy as historian Noah Lewis discusses the role of African Americans in the Revolutionary War. This Virtual Ephrata Academy occurs on Thursday, August 11 at 7:00 p.m. The free Zoom program, presented by the Historic Ephrata Cloister, requires advanced registration available by following this link https://us02web.zoom.us/meeting/register/tZAkdO6rpzkoG9UKBF-TmKEB7EvtdVCJIp8F

Noah Lewis has a degree in biology and has experience as a bio-medical technician and in electronics repair. Since the mid-1990s he has offered living history presentations portraying Edward “Ned” Hector, who served at the Battle of Brandywine in 1777. Mr. Lewis has done extensive research on the life and times of Hector and his fellow African Americans who served in the Revolutionary War. Mr. Lewis has offered presentations at schools, local historical societies, and museums.

Written by Michael Showalter on August 11, 2022. Posted in Ephrata Cloister

Ephrata Cloister is one of 26 historic sites and museums on the Pennsylvania Trail of History. For more information or to request a free 24-page visitor guide, visit www.phmc.pa.gov or phone toll free 1-866-PATRAIL.

The Ephrata Cloister Associates is a non-profit organization that works in partnership with the Pennsylvania Historical and Museum Commission, supporting the mission of preservation and education at this National Historic Landmark.